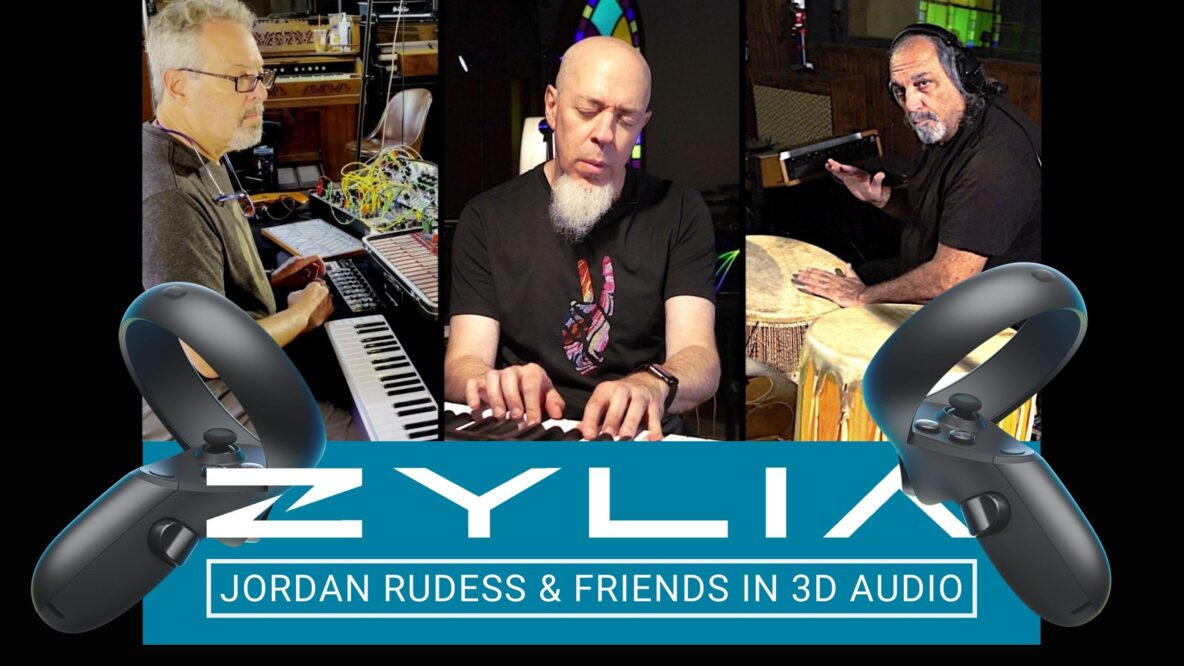 POZNAN, POLAND & NEW YORK, USA — April 21st, 2022 — Put on your VR goggles and enter the famous Dreamland Recording Studios to take part in an immersive, deep, and emotionally engaging music experience. Three outstanding musicians: Jordan Rudess, Steve Horelick, and Jerry Marotta gathered at the Dreamland Recording Studios for a spectacular and singular concert which was captured by multiple 360° cameras and the ZYLIA 6 Degrees of Freedom (6DoF) solution for 3D Audio recording. With the concert in the Oculus application, you will be able not only to listen to beautiful performances of fantastic artists but also switch between several 360° vantage spots and spin around in each of them. What’s more, the sound you hear will correspond to your position and movement giving you the most realistic impressions possible. Stand next to Jordan’s piano or watch Jerry’s drumming in close-up. Look around and admire the majestic space and stunning, colorful glass windows of the former St. John’s Church. The result is a truly striking experience that you will long remember.

“Spatial audio offers a whole different perspective, allowing listeners a dynamic sonic experience that is truly 360°. The artists and engineers at ZYLIA have created a cutting-edge technology that enables us to be truly immersed in the audio world, and experience music as if it’s happening all around us, literally because it is,” said Jordan Rudess, keyboardist of progressive metal band Dream Theater and progressive metal supergroup Liquid Tension Experiment.

By watching the concert, you join the artists and ZYLIA in financially supporting the Audio Engineering Society (AES).

HOW TO WATCH THE CONCERT?

The immersive concert “Jordan Rudess & Friends in 3D Audio” is available to watch now on Oculus App Lab for the nominal fee of $14.99. The proceeds from the concert will be donated to the AES – a non-profit organization that unites engineers, creative artists, scientists, and students worldwide. The link to the concert can be found here:

The “Jordan Rudess and Friends in 3D Audio” production is a compelling introduction to technology that realizes the potential of immersive audio,” said Professor Agnieszka Roginska, a Fellow and a Past-President of the Audio Engineering Society. “From the perspective of the AES’s decades of leadership in spatial and immersive audio technologies, the AES recognizes Zylia’s commitment to extending the application of these technologies. We are delighted and grateful for their support of AES’s mission with their generous contribution of the project’s proceeds to the Society.”

THE TECHNOLOGY BEHIND THE CONCERT

360° cameras are already quite popular among filmmakers. ZYLIA, however, has furthered the real potential of 360° video production by combining the view from multiple such cameras with 3D audio. This novel approach can change the way we virtually interact with artists, music, and places. An immersive audio-video experience in 360° and VR productions is achieved through the application of ZYLIA’s years-long research into the application of Ambisonic technology to the recorded audio.

Ambisonic sound is a representation of natural spatial listening – the human ability to recognize sounds in the 3D space through the characteristics of intensity, direction, height, and timbre. Recording with an Ambisonics microphone captures an entire 360° sphere around the mic – the entire 3D sound-space. Ambisonics audio can be further described by ‘orders’ – the higher the order, the greater the accuracy of the reproduced sound, the greater depth or, in other words, the higher the resolution of the recorded sound-sphere.

ZYLIA’s 6 Degrees of Freedom solution as used in the “Jordan Rudess & Friends in 3D Audio” production is based on multiple ZM-1S, 3rd Order Ambisonics microphones. During the recording session at the Dreamland Recording Studios, the system captured the entire 3D sound sphere in the studio, including not only the instruments being played but also the acoustics and ambient sounds of the venue. The audio is perfectly synchronized with 360° video, so a viewer using VR goggles and headphones will hear a lifelike shift in sound every time they change their view of the recorded performance.

The ZYLIA 6 Degrees of Freedom Navigable Audio solution can be used for many different applications, including:

“We believe that 3D audio is a critical element in the ever-evolving worlds of gaming, filmmaking, and music production. Experiencing sound as a dynamic and multi-dimensional entity creates the sensation that listeners are actually there, fully immersed in the world of the music. It is ZYLIA’s goal to make 360° sonic experiences available to audiences everywhere.”– said Tomasz Żernicki, CEO of ZYLIA.

ZYLIA develops innovative, world-class 3D audio recording technologies and turns them into products that improve the lives of musicians and audio creatives. With a passionate and dedicated team of experts in music production, audio research, software, business and product development, the company crafts and delivers products with the potential to redefine and revolutionize the way 3D sound and musical performances are recorded and produced. Leveraging their personal experience as musicians and tech gurus, along with input from music and audio communities around the world, ZYLIA’s experts bring musicians agile recording tools that make it easy to be creative in any environment.

Our solutions are used by musicians and sound engineers who work with Sony, Disney, Game of Thrones, Poznań Philharmonic Orchestra, and many others.

We also love to support artists! ZYLIA is involved in organizing volunteer efforts including Music CovAid by ZYLIA.

More information is available at http://www.zylia.co/.